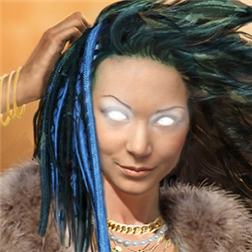 Zachary Nixon Johnson and his holographic assist Harv and his beautiful psychic receptionist Carol are hired by Dr. Randy Pool to find the bionic bikini, a device that gives a normal supermodel psychic powers. Dr. Pool tells Zach and his team that the bikini was funded by a reality TV network that wants souped-up supermodels. Zach soon learns that the true investors behind the BB are even more dangerous and insidious than the entertainment industry....

It's 2057 and you play the part of Zachary Nixion Johnson, the last PI on Earth. Can you and your holographic A.I. sidekick solve the case? Better yet, can you survive to the end?

Written by novelist John Zakour, the author of a number of sci-fi novels published by DAW books (among many other published works).