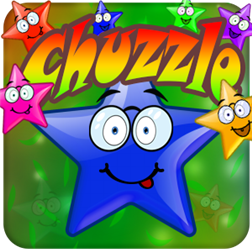 The player is presented with a 6x6 board of multi-colored fuzzballs called "Chuzzles" in order, which removes those Chuzzles and allows new Chuzzles to drop onto the board. Moves are made by dragging rows and columns. The rows and columns "wrap" when dragged off the grid; Chuzzles on the left reappear on the right, top reappear on the bottom, and vice versa. This "wrapping" of the grid can be a source of difficulty because some moves may require the player to drag edge Chuzzles to the middle. Eliminated Chuzzles' eyes fly into a flask to the left of the board. When the flask fills to its neck, the level ends and bonus points are awarded, 1000X the level number in Casual difficulty, and 2000X the level number in Expert difficulty.

The overall gravity of the grid is downward; new Chuzzles appear from the top.

Various trophies are awarded to the player for certain accomplishments in the game. Examples include "Chuzzbomber", awarded for exploding 1,000 Super Chuzzles, and "Speed Master", awarded for clearing 2 levels in Speed Chuzzle without getting a lock.

Tales of Phantasia A...