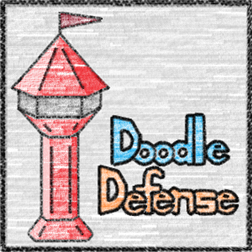 Doodle Defense is a Tower Defense game that can be enjoyed by both casual and hardcore gamers. The game offers enjoyable and colorful game play with a challenging, but fun experience.

6 Types of Towers:
-Normal : Basic creep that progresses slowly ahead with an average health
-Armored : High health point creep that can take a beating, but is also very slow
-Speed : Fastest creep in the game, but also one of the weakest
-Flying : This creep will bypass your ground defenses and walls by flying from start to finish
-Dividing : This creep will separate and split into smaller creeps until it is killed a total of 7 times
-Parachute : You thought the Flying creep was bad? This creep flies and upon death drops a Normal enemy

Make It Rain The Money