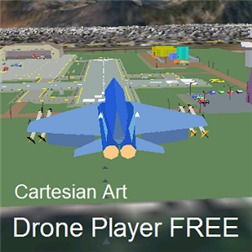 Drone Player FREE provides a flight simulation experience that allows you to control aircraft in all phases of flight including taxi, takeoff and landing at an airbase as well as an aircraft carrier. It will also allow you to practice with aircraft armaments however, in order to score and fight the artificial intelligence driven enemy, you must purchase the paid version of this game "Drone Player".

Part of the game is to figure out the intuitive user interface by experimenting with button taps and various settings. This game does not require your personal information or GPS or map information - it does not allow the user to access the file system, or any pictures, video or any other files on you phone - it has been purposefully designed to be completely safe to operate in its own sandbox for any age group.

This flight simulation game demonstrates the project code from the book "Flight Simulators For Dummies" by Luis Chocotzin Furr. The project code is free to all who purchase the paid version of this game "Drone Player".