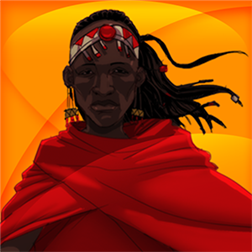 Leboo Sironka, a Masai Warrior, the best among 13 spies was sent to spy the enemy clan of Mtetwa far into the forbidden borders.

Kizee, the evil witch revived a spell on the forest that had been long sealed by the 7 elders. The spell awakens the sleeping giants, the gnawing stones, the soul-seeking masquerade, the evil forest animals and the damned souls.

Most of all, she twisted the route out of the border. Leboo was lost, unable to get to the other side. Yet he kept on running.

The fearless Leboo, with only his Masai magic stick advances further.
The only way to survive is to attack, defend and avoid deadly traps, collect treasures of the wild to help him get home to his people to warn them of the coming attack from the enemy clan. Their lives depend on in his safe arrival!!!

o play the Masai game on your device, you would use the controls located on the screen, below left and below right.