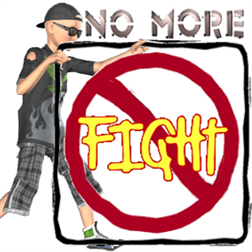 NO MORE FIGHT
for Windows Phone

NO MORE FIGHT tells the story of Kevi, a young
student, who is constantly bothered his school by two older guys to have a rare disease, then he decides to face them in a struggle in which, due to his poor health, were to avoid and dodge the blows with great skill to hit between them.

How to Play:
------------
Must avoid possible bumps placing you in the middle
making them fight each other,- To Fight exist strong fist and fast, the kick and the hook was enabled crouch button and giving some hits will have power to download and use combos like neck breaks and column breaks.

Language in English and Spanish.

Fixed some issues that leave the game hanging, for any details please send the information to my email [email protected] and I'll be sending pictures of new fighting combos.