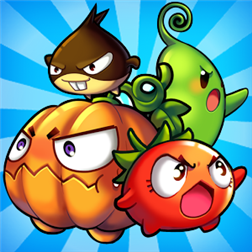 Rage of Fruits
for Windows Phone

The monsters have been eating way too much junk food, and now theyâ€™re hungry for something healthy â€“ you! Take your team of valiant veggies into battle as you attempt to keep the monsters from invading your plot.
An action-packed game of good food versus bad diet, featuring fast, intense gameplay as you repel the ravenous monsters using your powerful veggie catapult. Itâ€™s eat or be eaten in Grow Away!

Armed only with a touch-powered catapult, you are the last line of leafy defense as a herd of herbaceous-hunting monsters storm the veggiesâ€™ homeland. Load different types of gallant greenery into your catapult and pound your enemies with powerful produce before itâ€™s too late and they plow through your gardenâ€™s barricades.

Nine types of vegetables are available in Grow Away to help you repel the greedy invaders. The irrepressible onion that makes your enemies cry in terror, the brave tomato that makes a marvelous mess of your opposition, the fearless garlic that lingers on the battlefield and many other gallant gardening goods are all ready to go to war against the malnourished monsters.