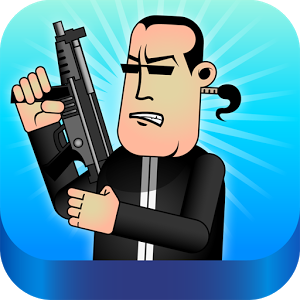 Zombies: Run or Kill
for Android

You as a player are put in the position of a zombie smasher whose home was a place full of peace and tranquility until a zombie invasion happened. The living dead can nowadays be seen all over the place. This is a true zombie village now!

Completely new, improved game Interface.
Google Cloud Save - save your progress and login with Google account from another device to continue.
One more background music theme you can set in settings.
Fixed problems that caused crashes on some devices.
Another major update coming soon.
Kill zombies now! You can run, but you cannot hide – Zombies: Run or Kill, a new free shooting game is here! Are you ready to stop the zombie tsunami?

Cool Features:
► Never-ending 2D zombie shooter game
► Zombie killing game with tons of cool missions to fulfill
► Connect with Facebook to invite friends and share your zombie experience
► Connect with Google+ and compete with your friends for the No.1 position
► HQ graphics and amusing sound effects
► Zombies: Run or Kill is now MOGA Enhanced – available at
major retailers, carrier stores and online at http://www.MOGAanywhere.com
► Numerous different amazing weapons at your disposal such as light saber, laser canon, swords, guns and many other cool stuff
► Being an awesome timer killer, it’s suitable as a game for kids, teens and adults
► You vs. zombies – an adventure may start!

Right from the start of this shooting game, you have two very simple objectives where you need to thrash oncoming zombies and survive as long as your health meter doesn’t’ trickle down to zero. As the game progresses, the zombie claustrophobic environment is starting to grow and the fear in player is rising as he is being surrounded by numerous zombie hordes.
Your character is equipped with a basic sword that can be used infinitely but is less effective compared to some other weapons available throughout the game. The range of guns is pretty impressive. The number of zombies you can kill until the health reaches zero determines your score.

Admit to yourself – ‘Zombies ate my friends and I am the only one left to fight the zombie evil and stop the infection!’ Start your zombie road trip with the mission to slay, kill, smash, burn down to the ground all the zombies.

From the highway down to the village and frozen ground comes the ultimate combat of good vs. evil, YOU vs. Zombies! There is no frontier between you and the undead, and you have to fight hard.
The only way to survive the endless zombie hordes is to use quick thinking and to have good reflexes. Otherwise, you’re dead my friend.

This is one of those cool shooter games for kids and adults that you should keep on your Android phone or tablet for that matter, and access it right away whenever you are bored.
Download one of the best zombie games ASAP!