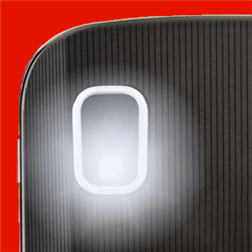 Flashlight-X is the most popular LED flashlight and most rated app in the Windows Phone store. It features a LED light, battery meter, a compass and an S.O.S mode that does not interfere with the user experience. Flashlight-X is the best tool whether you are hiking at night, trying to find something in the dark, or in case of an emergency.

Flashlight-X received 2012 Most Downloaded Non-Game Appies Award. *** Thanks for millions of downloads and thousands of reviews! ***