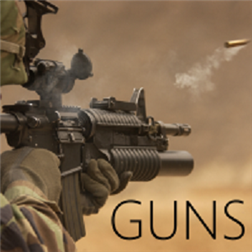 The Ultimate Gun App... Now with more Guns! You never thought your phone could be this much fun. And its all FREE!

Select from multiple guns and start firing away. Each gun has its own realistic images, sounds, and bullets. Fire the gun, view the smoke, and listen to the sound of bullet casings as they hit the floor. When taking a break from shooting everything in sight, read up on your favorite guns and learn about the designs and specifications that include â€œRate of fireâ€, â€œCartridgeâ€, â€œMuzzle Velocityâ€, â€œEffective Rangeâ€, â€œFeed Systemâ€, and so much more.

Advanced Features include:
- Your choice of Multiple guns
- Accelerometer support (Rotate the gun to fire)
- Adjustable settings allow you to change the sensitivity of the Accelerometer and enable or disable the vibrate feature.
- Realistic Gun images, sounds, and bullets.
- Detailed Gun information including Specs design and more.
- Records your stats.