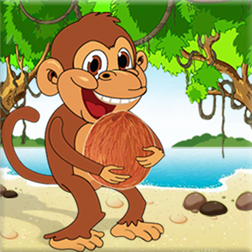 The best action adventure game on your Window Phone MarketPlace! And it's free!

Exciting and fun physics based adventure game!
Worldwide monkeys are known for their clever act and intelligence .They have adaptation behavior.
Here comes a perfect fun for displacement game lovers.
Monkey Drift is a all new experience in android gaming where a monkey is lying on the float.
We have a hanging coconut which needs to be thrown over him .You will have to judge the displacement of the float to correctly throw the coconuts to him and earn points .But be cautious while throwing the coconut .If coconut drops before him ,the float will move away from you and if drops after him ,then monkey will come near to you.
In this amazing game we have introduces different levels in terms of Planets .To reach another planets ,monkey has to catch /grab the maximum no of coconuts in given time .The sooner you help him in catching the coconut ,the earlier monkey goes tom another planet.
Monkey Drift give you game experience of different Planets , like Earth ,Moon ,Mars ,Far Away and Alien and many more.

Earth : A beginners level with which most of us are familiar you can take the experience of beach ,colourful sea ,coconut and monkey.

Moon:- A lifeless planet with 1/6th the gravity of earth. the Co-ordination of coconut throw will be challenging in respect of earth. You can imagine how life will be tough on moon.

Mars:- Much about the size of earth ,its windy and dusty. Its very challenging for you to throw coconut because of windy and dusty environment that reduce the visibility of monkey .its too very funny planet in respect of earth and moon.

Far Away:- A planet far away with more gravity that results in loads of weight to everything. its hot and scary.

Alien:- Inhabited by little people and mutated monkeys that give alien experience.